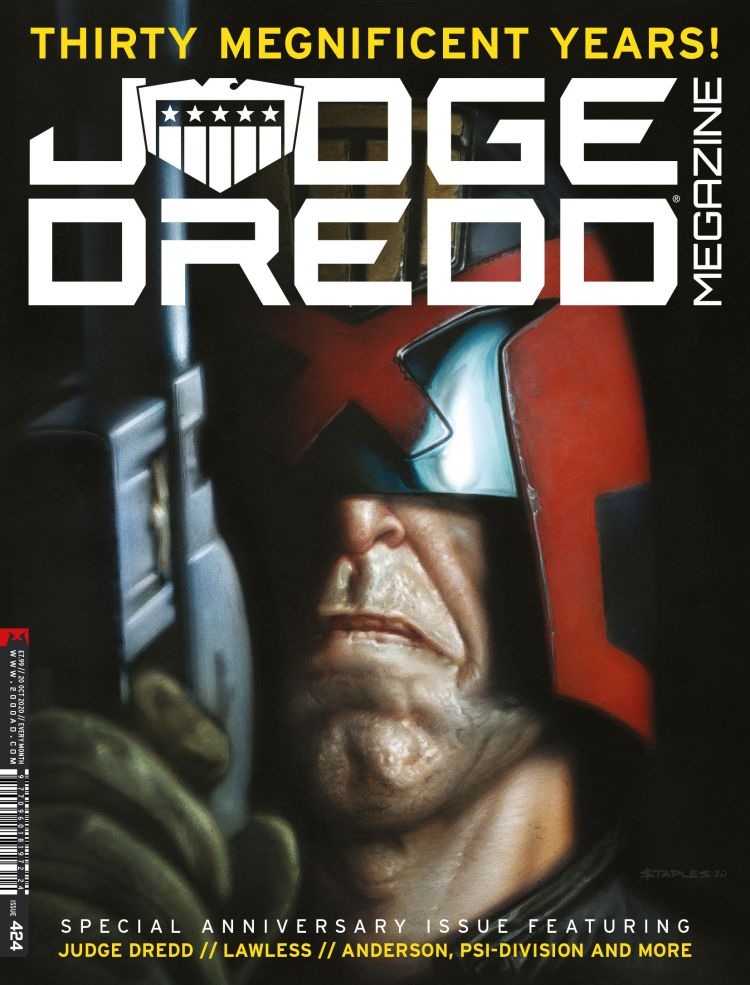 Mega-City One, 2142 AD. This vast urban hell on the east coast of post-apocalyptic North America is home to over 140 million citizens. Unemployment is rife, boredom universal, and crime is rampant. Stemming the tide of chaos are the Judges, future law-enforcers empowered to dispense instant justice. Toughest of them all is Judge Dredd – he is the Law!

Imagine a Mega-City One from an alternate timeline – less the gleaming metropolis of the twenty-second century but instead an art deco retro-future variation. Joe Rico is the one good cop in a police department riddled with corruption, and he’s about to get a new partner in the shape of Amy Jara...

USA, 2035 AD. The new Justice Department is still in its early years, with Judges working alongside the police, military and the government, though Fargo’s people are slowly taking over. It’s proving an explosive transition, with many citizens – and more than a few cops – unhappy with these helmeted officers taking to the streets...

Mega-City One, 2142 AD. Psi-Division is a section of Justice Department that specialises in Judges with accentuated psychic talents – from precognition to exorcism, it is at the forefront in the war against supernatural crime. Cassandra Anderson is Justice Department’s top telepath, and has been instrumental in defending the city from numerous foes...

Brit-Cit, 2142 AD. Four different people in Ciudad Barranquilla – academic Barrancourt, exJudge Mineiro, gangbanger Correira, and transgender street-walker Chavez – all awoke from near-death experiences, and as consequence are capable of dealing with the supernatural. Now, they’ve fled to Brit-Cit, hoping to find a way to escape their curse...

After the events on the Mayflower, the cargo ship the Solips discovered the Dark Judges Death, Fire and Mortis floating in space, and the alien superfiends murdered the crew. They subsequently also decimated a colony, Dominion, and when marines were sent in, they were joined by Fear. Dominion was destroyed, and Death was trapped in a Boing® bubble...

Colonial Marshal Metta Lawson was appointed to the frontier township of Badrock on the planet 43 Rega, intent on stamping her authority on the colony. But in doing so, Lawson made many enemies, including Munce, Inc., the mega-corporation that funded Badrock. Now, with the SJS also running things, mayoral elections are in the offing...