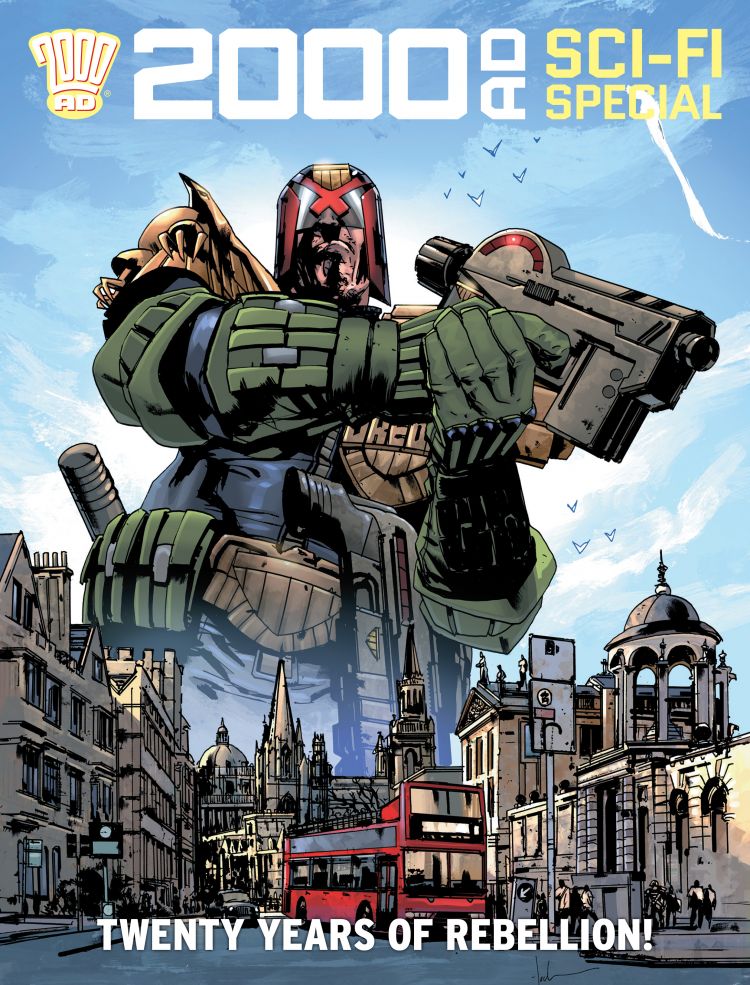 Marking 20 years since the Galaxy's Greatest Comic began life under games developer Rebellion, the 2000 AD Summer special is a 100-page celebration of the last two decades!

Mixing brand new stories with classic cuts from the archives - this special features a cover from superstar artist Jock, and new tales from Al Ewing on Judge Dredd, Dan Abnett on Kingdom and Ian Edginton on The Red Seas, plus a delve into the archives featuring Nikolai Dante and Sinister Dexter, and features exploring Rebellion's tenure as 2000 AD publisher! Don't miss this birthday bonanza!

Mega-City One, 2142 AD. Home to over 140 million citizens, this urban hell is situated along the east coast of post-apocalyptic North America, with the irradiated wasteland known as the Cursed Earth to the west. Unemployment is rife, boredom universal and crime is rampant. Tensions rest on a knife-edge and only the zero-tolerance Judges can stop total anarchy. Toughest of them all is JUDGE DREDD — he is the Law!

Experience the terrifying side of Thrill-power with these one-off tales from beyond the shadowy veil of sanity. Whether they be ghostly goings-on that send shivers up the spine or guts-to-the-wall splatterfests that sear the retina, nothing is what it seems in these glimpses of a horrifying realm beyond our own. Sitting alone at night, upon hearing a noise in the next room, do you investigate? Who knows what may be waiting for you...

Earth, the far future. Mankind has been all but destroyed, those still surviving forced into hiding by Them — insectile creatures that have taken over the world. Charged with protecting humanity are genetically engineered dog-soldiers like Gene the Hackman, who leads his pack to keep the cold place clean. Guided by his Masters’ voices, Gene is the Alpha dog — but has he met his match in another apex predator...?

Gun-sharks Finnigan SINISTER and Ramone DEXTER are the best hitmen money can buy in the future city of Downlode, which lies sprawled across the heart of Europe like a hit-and-run victim. Premier whack-merchants with chalk outlines around their souls, you pay and they slay. The metropolis’s underworld is a violent, dangerous place, but no one is more lethal than these gun-lovin’ criminals...

Brit-Cit, 2142 AD. Much like its Mega-City counterpart, Brit-Cit Justice Department has its various divisions, from Tek to plainclothes, Tactical to Psi, and one of its more prickly operatives in the latter is Lillian Storm, who has the ability to talk to the dead, and is often accompanied by her ghostly helpers. Now, a mysterious electrical storm is lashing the metropolis...

Year of the Tsar 2674 AD, and bastard son of the Romanovs NIKOLAI DANTE has bonded with a cyborganic Weapons Crest, an alien combat computer, which allows him to extrude lethal bio-blades...

Year of the Tsar 2676 AD, and bastard son of the Romanovs NIKOLAI DANTE has bonded with a cyborganic Weapons Crest, an alien combat computer, which allows him to extrude lethal bio-blades. Dante, partnered with Jena Makarov, has led a rebellion against the tyrannical Vladimir the Conqueror, and after a bloody battle succeeded in ousting him from power. But their victory was short-lived...

Deadworld, a planet similar to Earth in another dimension. Once, this world was thriving — but then a psychopathic dentist’s son called Sidney was transformed into the creature known as Judge Death, and he determined that life itself was a crime. Creating lieutenants to aid him in his task, they set about massacring an entire planet, purging it of all life. Now, they stand on the bones of a global graveyard...